Not Every Crisis Is A Fire – Jake Russell – Cobsalad

Not Every Crisis Is A Fire

Our instinct to help others in need, especially those we love, is a sign of our natural human (primal, even animalistic) drive. We see someone suffering and unless we’ve got a screw loose in the old noodle, we want to come to their aid.

It strikes me there are (at least) two types of crisis a person can suffer.

One is urgent, and the form of help required doesn’t call for much consideration or discussion. It’s blindingly obvious. You see and hear someone crying out at the second-floor window of a burning house, for example, and it’s safe to assume you know what they’re after. It’s unlikely what they actually want is to know who won Strictly Come Dancing because their TV just lost signal.

But the other type of crisis is more nuanced, more complex, and requires a form of selflessness entirely different from running into a burning building, and in some ways might even be harder to perform precisely because what the other person needs isn’t obvious to you, even if you assume it is.

Imagine, by metaphorical example, you become friends with a prisoner. He’s been locked up for 15 years with no end to his sentence in sight. You learn he had an unfair trial. Evidence was wonky, witnesses were shonky and the judge was a donkey. And for 15 years your friend, from prison, has filed appeals, found one new lawyer and legal specialist after the other only to be let down time and time again, studied the law in relation to his case, and subscribed to extracurricular training, schemes and out-reach programmes to boost his chances. In short, doing as much as he could possibly do to try to rectify his situation, but all to little or no avail.

And each time you visit the prison your heart goes out to him because you’ve come to love him. And you see him suffering, perhaps unfairly, perhaps not – you don’t really know – but what you do know is he’s a good person experiencing pain and you think he deserves better. You want to help.

So you jump headfirst into what you think is a burning house and make suggestions of lawyers who’ve done great things for other unfairly convicted prisoners. Or you send him articles in journals about legal technicalities that might pertain to his case. Or you tell him about a judge you’ve heard of who’s now campaigning for prison reform.

And to every suggestion you make, your friend, a little wearier each time, tells you he’s tried it all, he’s spent 15 years doing everything he’s had the energy and time to try, and now, after all these years of effort and disappointment, he no longer has much faith in the justice system. But, still, he thinks he’s just about found a way to live with his fate, albeit in pain, albeit sad and angry sometimes, but a way nevertheless.

His apparent refusal to heed your advice and suggestions upsets you. How can he just give up, you might think? Can’t he see how painful it is for you to see him like this? How can he not try one more avenue or explore one more recommendation? After all, look at all this reading into his case and into the law you’ve been doing! You think you know the ins and outs really well and you believe he can get out.

And you might be right. In fact, you are right to want his suffering to end, to find a way to bring about his deserved freedom. But does that mean the form of your help is right? Have you sought to understand which kind of crisis you’re really dealing with?

Most importantly, did you stop and check to see what help he actually needs or wants from you? Did you ask him or just assume? Because if you did ask you might learn that what would help most would be for you to just sit and listen; to hear what this difficult experience is like for him; to hear him talk about how he’s feeling; to accept him as an autonomous adult who’s responsible for his own decisions; and to do so without the need to try to fix his feelings, fix his decisions or fix his situation; to not rescue but simply bear witness.

Which, admittedly, is a difficult thing to do. To see a person you love suffering and to hear them describe that suffering is tough. Because what do you then do with the feelings that that brings up in you? How do you handle those feelings – the helplessness, the sadness, the pain, the anger? Most of us don’t or can’t handle them (or at least we believe we can’t). And so we avoid them, and rather than simply bearing witness, we jump into action instead. And then we get upset when our action isn’t met in the way we want and expect. And in so doing we make our inability to handle our own hard feelings his problem instead.

But we’ve mistaken this subtler type of crisis for the crisis of the burning house. And they’re not the same at all.

This second type of crisis doesn’t require action or rescue. Not from you at least. There’s nothing for you to fix, not unless he specifically asks for it. That’s for him to do or not do as he sees fit. That need of yours to fix things is just that—it’s yours not his.

By not listening to him to discover the help he actually wants and needs, you’re unintentionally imposing your needs and expectations onto him, adding yours to his already hefty pile. He has needs enough of his own. He doesn’t need your unmet needs as well

This kind of help is difficult. I repeat, it’s nuanced and complex. Therefore, rather than assume, try asking instead. Because no matter how obvious you think things are, they’re probably not obvious by any stretch. Because maybe what he needs for himself and what he needs from you two are entirely different things.

Where so many of us fall down here is an inability or unwillingness to empathise. Even when we think we’re empathising we’re not really. Because how often do we approach this kind of crisis by saying “if it were me” and think we’re empathising? “If it were me” isn’t empathising. “If it were me” is simply assigning your own thoughts and needs to the other person. This, if anything, is the opposite of empathy. It’s actually a subtle and quite insidious form of judgment because it implies what the other person is doing isn’t meeting your set of standards.

As I said, it’s a selflessness of an entirely different kind. And it might be the biggest gift of help you can give.

Until next time and with love, Jake x 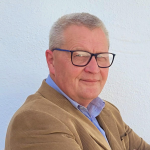